Usually, this time of year I would be seeing the season out on the river, chasing Chub before the shut down, but for obvious reasons that include the obvious and with it travel restrictions, add to that once again a very wet winter, my local Ouse haunts are up and, in the fields, making it a task to far! Add to that, the odd snow flurry and it's near impossible, so the Chevins will have to put up without me!!

I'm lucky enough to have the G.U.C (Grand Union Canal) running through my hometown which is no more than five minutes away to the nearest section, so it's that that I have turned my attentions to over the last couple of months "In the search for Perch"
The recent rains have also made that difficult fishing, what with it being a horrific chocolate colour and a near permanent flow!!
Picking and choosing the slightly milder conditions if I can, around work and home commitments if possible?

I arm myself with as minimal kit as possible just incase I need to be mobile (but more often than not I settle on a bait and wait strategy).
A couple of Neoteric power quivers with the light tips on, 3000 Axis reels loaded with 6lb Reflo feeder line.
A simple running rig clip, stopped by a small bead and a grip stop, while a size 8 Allrounder hook completes the traps. One rod will usually be a straightforward arsley time bomb, the lightest I can get away with.
The second rod is complimented with say a 10gm mini cage feeder, this is filled with worm chops and soil.

Bait wise, and it's a firm favourite of mine "good old Lobworms" usually Two but sometimes Three, especially if the water is really, really coloured like it has been of late.
A little edge that I've found while fishing in the murky type conditions is to glug my chopped hookbait worms with a predator type glug, just for the extra attraction.
Maggot is then the only other addition, sprayed via a catapult on a little and often basis, not only to try and attract the perch but also the bait fish.
Swim choice is usually determined by marginal structures, boats, foliage and trees/bushes. Something that looks Perchy, if you get my drift?

Although it's been tough going, and I have encountered a couple of blanks as I've moved through the stretch in my search, I have also managed to slip the odd better fish to the net
as shown with my most recent capture.

So, with that, I'll sign off by just saying that if those reading this have a local stretch, some worms, coupled with milder days, then take the opportunity and hit the bank.
It's good for the mind and you may just bump into a surprise along the way. 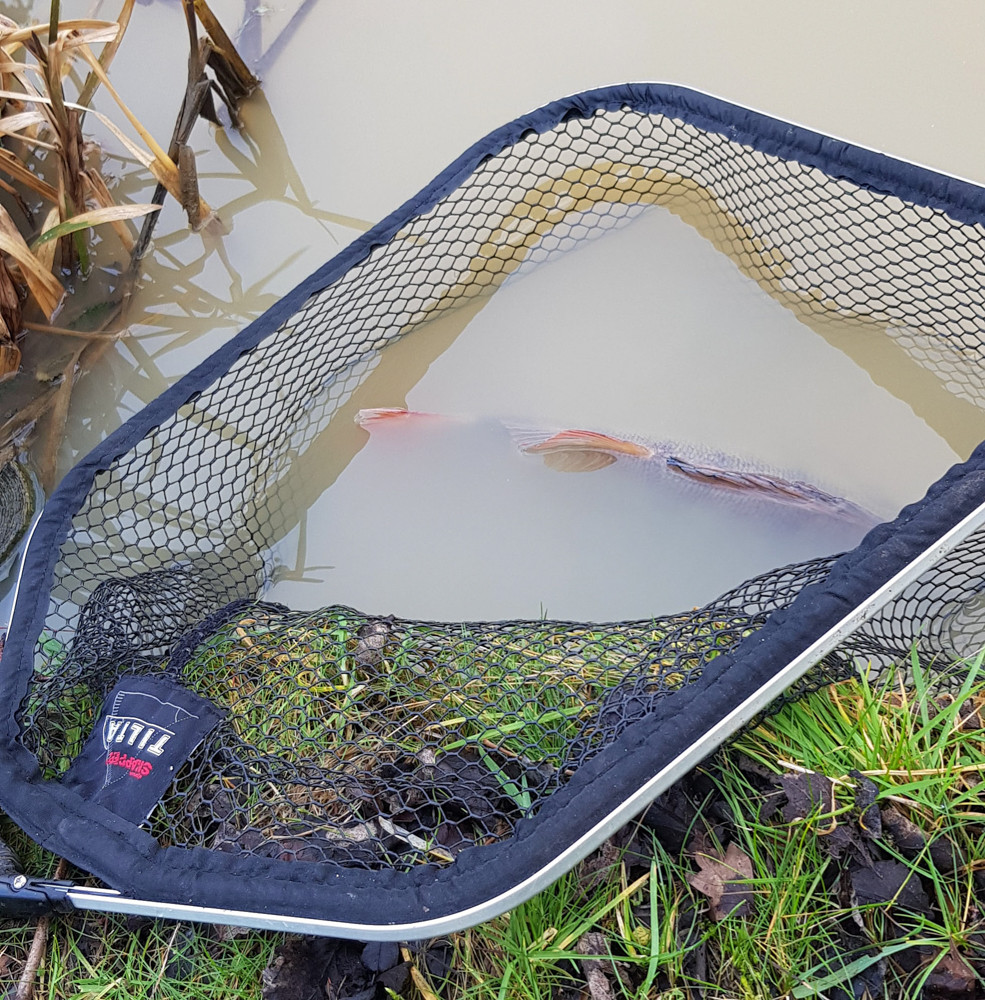