I had spent April in search of some gravel pit Roach and Bream, whilst I had a few of each, nothing of note.  So, it was with a certain amount of joy that May arrived as May is Tench time.

I like to think that by May the Tench will be feeding confidently enough for a decent number to be caught, they’ll also be starting to get big.  However, my first session proved fruitless, it was just an overnighter but id still hoped for a bite or two.  Next trip, a two-night affair proved to be not much better with just one Tench of 6lb 12oz.

I had been targeting one of the deepest lakes on the Medway valley complex with depths of 30ft in places, although I had been fishing the shallower plateaus of 8 to 10ft. Hindsight is wonderful thing, I should have realised the Tench in there might take that little bit longer to get going.

I decided to leave the lake for the back end of the season when the Tench in the shallower lakes had spawned.
So next time out I went for a change of venue, one with not as much depth.

I plumped for a swim id fished before a few times, so I knew the features and quickly set about rigging up and measuring out my marks. I had a very shallow bar at 40yrds with a nice depth of 8ft just the other side. It’s a nice depth to fish, it might sound daft but it’s not too shallow and not so deep that they won’t be in it.

Evening came and out went some Sonubaits tinned hemp and a mix of 2mm S-pellet with 2mm Robin Red pellet, I don’t bait heavy just 3 medium spombs per rod. Up at 4:30 I started to work the feeders, with every man and his dog fishing heli rigs, mono hooklinks and combi feeders I thought id mix it up and have one on the heli rig and another on an inline grub feeder with the new micro braid hooklink material.

The day went well with 7 Tench to 9lb 8oz, the 9 being on the heli rig with worm hookbait. I spombed out again then reeled in at last light and set the alarm for 4:30.

The morning went well with a Tench every 30 minutes including a double of 10lb 1oz and on the inline grub feeder too. Catching one the right side of 10 made up for all those I’d had previous seasons of 9lb 14oz, my bogey number. 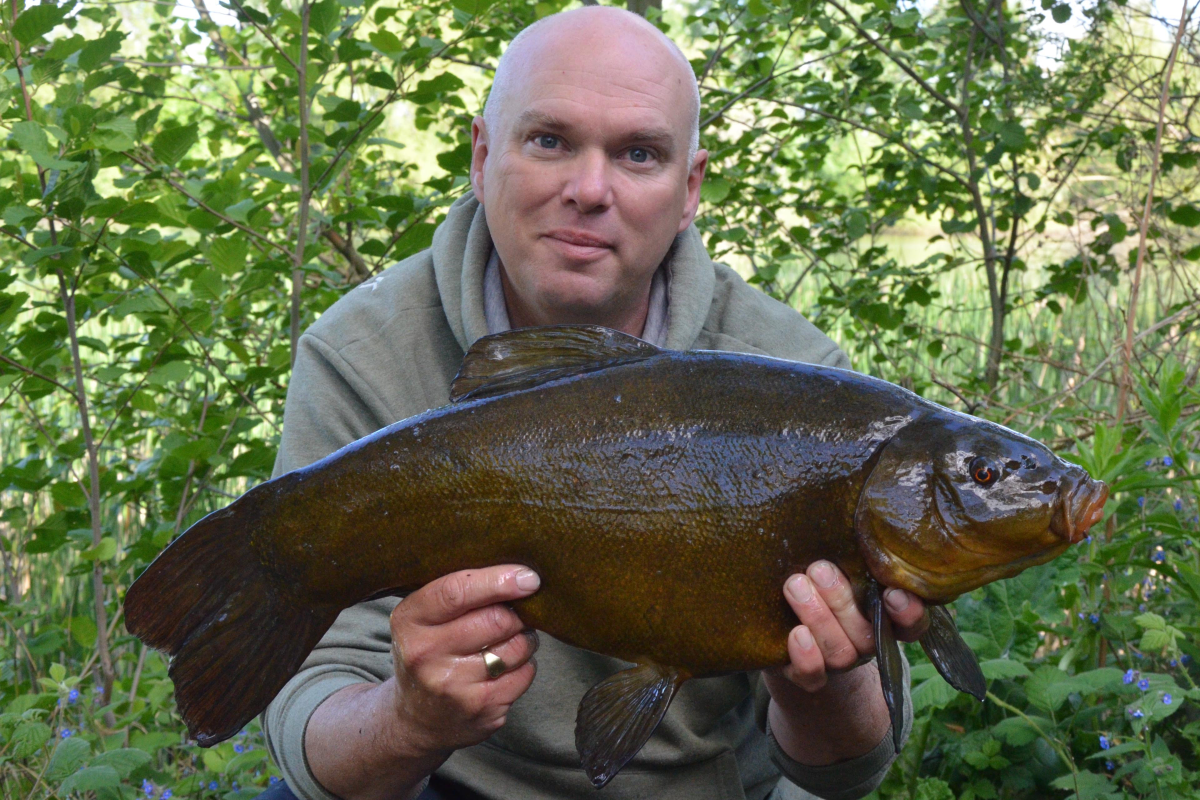 Next trip out had me on the same lake but different swim, a carp angler had said he had seen Tench rolling so I thought I’d give it a go. This time I wasn’t so lucky and didn’t even see a Tench roll, I packed up early and headed for home.

So that brings me up to this weekend, arriving Saturday evening after work I discovered the lake closed as the carp were spawning. I had a drive around the complex looking at other lakes and went in a swim on the end of the northerly that had been blowing for a week. Whilst it wasn’t particularly pleasant being cold, I still fancied it as id caught in the past from there in similar conditions.  By Sunday mid-morning I knew I’d made a mistake as id not had or seen a thing. With another 24hrs available a move was in order. I headed to another lake in the valley, one with plenty of protection from that northerly that was still blowing. The lake was really weedy, in fact id not seen it this bad so early in the season. I knew a few swims, but they were all weedy, with all the little gravel plateaus covered.

Not one to give up that easily I set about making some room for a couple of baits in an area 5ft deep surrounded by 10ft. For this I use a castable weed rake on my spod rod, its repetitive and hard work. Iv no idea how many casts I made but it took me 2 hours to clear an area before I eventually started to feel more gravel than weed. Swapping the rake for the spomb I put my usual mix out of tinned hemp and 2mm pellet.

With plenty of weed still about I decided on inline grub feeders, these are far easier to reel in through weed than heli rigs and combi feeders, and having used them the previous week I was pleased with the way they were working.  With it being a bit lighter in the mornings now, the alarm was set for 4:15.
At 5am the KBI alarm had me up, I thought it must be a liner as I really wasn’t that confident, but no, the line was tightening, id kept the free runner on the neoterics tight as I didn’t want any fish diving off the plateau and straight into the weed. None the less the fish soon found the thick weed between the plateau and me! Steady pressure had her coming and, in the net, 8lb 7oz, a nice start. I followed this with two males of just over 6lb. Then a 7lb 2oz and 8lb 3oz and a smaller one of 5lb 12oz at 8am. 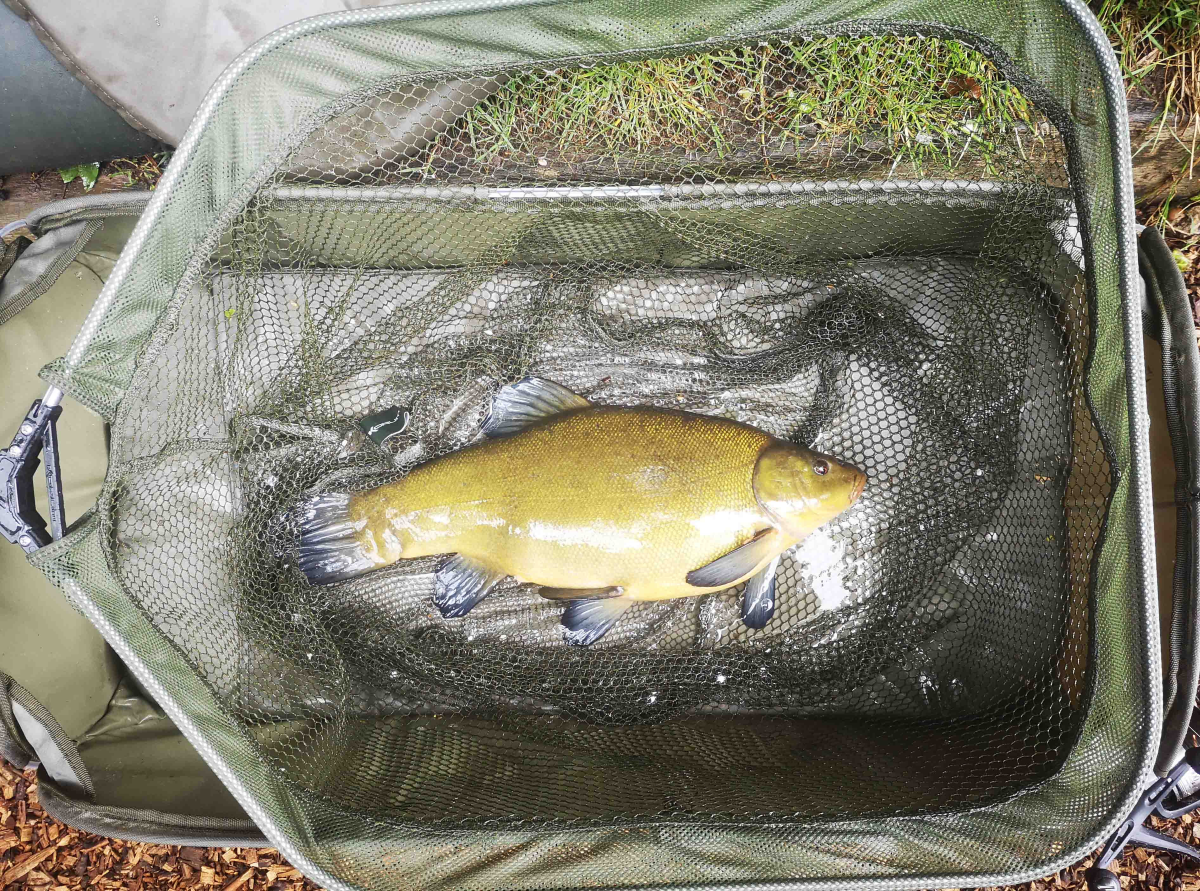