Surprise Catch on a Squirm

Although autumn was here, I wasnt quite into predator mood this year and since I had half a liter of maggots left from my last barbel session I took a small float rod with loaded Blobs and maggots and went searching for chub and roach on a small local stream

It is only between half a meter and 2m deep, very slow with lots of beaver dams on its way through meadows and swamps and on most stretches, you can jump over it.
But Roach and Chub didn’t like either maggots, me or the weather. After 3 hours I only had a couple of XXS chub to show for my efforts.
I've been driving around with my Korum Snapper 5-15gr finesse Jig Rod in the car since the end of trout season, so I opted for a spontaneous try for perch alternatively.
I am not really good at perch fishing and though I often imagined a big Perch living in that small stream I’ve never seen one, let alone hooked or landed one.

But one should never say never when fishing.

I fished a Floatex Squirm, Ned-Rig style. The buoyant nature of the bait makes it stand upright at the bottom and react to very small movements.
Cast out, let it sink and shake minimally into the line, then a little pull and back to shaking and twitching.
A very slow technique with which Hotspots can be fished very thoroughly.
The first few casts only led to contacts of sunken leave-litter or branches.
On the next spot, a promising looking deep bend with some big roots hanging, the line twitched suspiciously while I let the Squirm pause for a few seconds.
STRIKE!
“Damn.....Snagged....” These were my thoughts, at least for three seconds before the "Snag" started moving. A large vortex, over a meter behind where my line submerged, finally got the adrenaline going, at that time I still thought it to be an exceptional pike.
The fish swam calm and deep and didn’t seem much troubled by me and my 15-gram perch rod with 0.25 mono mainline, but since it was heading directly into the roots and dead branches, I had to give all the pressure the tackle would stand.
It felt like 20 minutes, going and back and forth, following the fish along the bank and stopping it with as much pressure as I dared, again and again. Then I finally saw a very distinct tail and knew which opponent I was battling.
It was more luck than skill that it never made it into the roots, and I was finally able to grab it by the lower lip.
I hardly noticed that I slipped meanwhile, and my rubber boots filled up with water.
It was not a giant for its species, but from a stream that small it was very special to me. As far I know it was also the first Wels ever to be caught there. 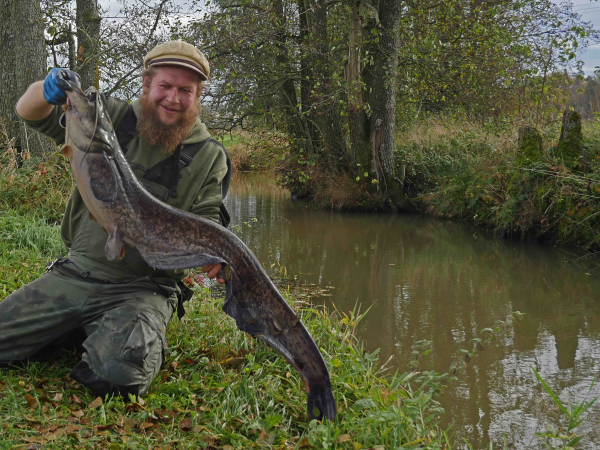